The independence of judges helps maintain the integrity of our judicial system and is a cornerstone of our democracy. The principle of judicial independence allows citizens to know that, when they go to court, the judge is not influenced by the government or other forces that might taint the process.

Judges must be independent, unbiased, impartial and neutral both in appearance and fact. This is the ultimate insurance that citizens will receive justice rendered according to the rule of law and their individual rights under the law. When a person appears before a judge, he or she must know and understand that he or she is going to be justly treated by a fair and open-minded individual who will adjudicate the case honestly.

One of the cornerstones of the Canadian legal system is the rule of law. This is the ideal that all people are equal before the law. For example, the rich do not have more power than the poor and women have the same rights as men. The rule of law also means that no one is above the law. The Canadian Charter of Rights and Freedoms is also very important. This document enshrines the rule of law and protects individual rights and freedoms.

To safeguard the rule of law and protect the rights and freedoms set out in the Charter, we need a legal system in which judges are independent, accountable and impartial.

In order for judges to apply and interpret the law, they need to be free from inappropriate influences.

In Canada, there are three branches of government: the Judicial (the courts), the Executive (the cabinet and the civil service) and the Legislative (Parliament and legislatures). Judges are independent and cannot be controlled by either elected officials or government employees.

To ensure judges are independent, three important safeguards have developed. They are:

Salary and benefits for judges are set on the recommendations of court commissions at both the provincial and the federal levels. Salary levels are set with a view to attracting high-quality candidates away from the often-lucrative practice of law and ensuring that money matters will not influence judges’ decisions. Judges are not permitted to have other forms of employment income.

There are clear lines of separation between judges and the other two branches of government. The legislative branch makes the laws, but judges interpret those laws in keeping with the Constitution, case law and precedent. While the executive branch (civil service) helps to staff court offices and administer court programs, the judges, under the leadership of the Chief Justice or Chief Judge, are responsible for establishing the rules and processes, sitting schedules and programs and initiatives.

In each province, and at the national level, there are judicial councils that deal with complaints about judges. However, judges are also held accountable in courtrooms every day. This is accomplished when judges:

Sometimes the courts will find that a law passed by the legislative branch of government is invalid. But the court is not the final word, as Parliament and the legislatures can change the law and, so long as they act constitutionally, thereby have the final say.

To help ensure that judges are impartial, judges are appointed instead of elected. In Canada, we believe that an elected judge might be influenced by those who supported the judge’s election campaign. 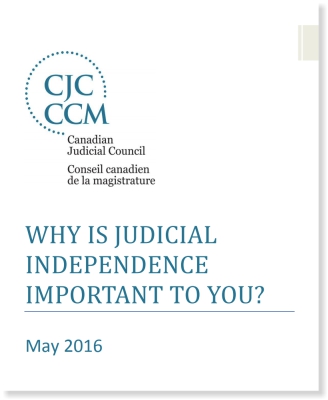 Why is Judicial Independence Important to You?

A publication from the Canadian Judicial Council.